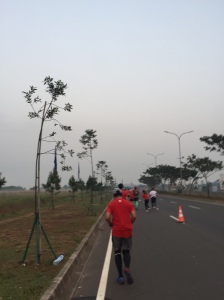 Mbak Lala, Marion and I

We woke up really early, get dressed and I couldn’t eat. Mami Vitri pushed me to eat at least banana and even made me a cup of instant cofee.

A shuttle bus (in a form of TukTuk) picked us up at 4.15. the hotel gave us a sandwich and mineral water for breakfast, I left it at my room….then decided to bring the sandwich. From Wheeler Bed and BIke , only took 5 mins, approx 2.5K, shortly we arrived at transition area.

And what is a race without drama?

That very moment I realized I left my bike shoes at the hotel! DAMN! I forgot what I did, seems I ran to the drop off point and realized it would do no good. The local said there would be another shuttle bus but I doubt. Friends told me to calm down and I tried, entered the transition area and prepared my stuff. Tried to call Alvin who was still in hotel, but he didnt hear. I  figured if I walked back and forth, it could take 1 hour or so, I still have spare time before the transition area close at 6.00 am.

I ran back to drop-off point, and fortunately the last shuttle bus (with Alvin in it) came. I asked for the driver’s mercy, with the help with locals, figured out my condition that I NEED to go back to hotel. The driver said yes, he dropped me off, I asked him “please wait for me for 10 minutes!” With a 20 Baht on his hand! 😀 It wasn’t bribing I hope.

I run frantically to my room and got it! FIUHHHH now I can smile! probably I couldn’t finish swim leg due to the choppy water, but at least I tried (to get the bike), didn’t I? As I re-entered the transisition area, I heard the MC said Fun Fact about this event. He said that in term of age group, the most participants come from Male 40-44! wooo, target market gw donk, mana mana aja nih yang available. *jahil* Udah tenang soalnya.

Another drama, ban sepeda kurang angin. The was a local participant telling me I should get my wheel pumped.

Damn! I was looking for a pump with an adopter (related to type of the wheel). Agak susah nyarinya, ternyata ada team dari Indonesia yant bawa! Bagus deh, ngga usah ngoceh pake bahasa Inggris. That local guy helped me with my bike, he pumped the wheels. Kap Khun Kaaaaa! Probably excited that someone from overseas came for the sake of this event! He told me he haven’t done Bintan, yet. I assumed it wasn’t  his first time doing half IM, he knew where the events are held.

Fortunately, next to my bike was an empty space, seemed the 1307 cancelled her. There ,  I took Subh Pray.  Next to me (1305 and 1304) were also  Indonesian. I met Dini several time. She gave me dates for extra energy and I asked for her sunblock too. Lupa bawa booo.

I took a gel and small bottle with me, dropped my bag to BAG DROP station, and off to starting pen, I was in Pink Lane. The slowest swimmers, whose pace is 2:30 / 100m and slower. I met Evelyn, good! Had friends to chit chat, then later with Luwung, and Indonesian designer lives in Bali. We entered the waiting area.

The different between Bangsaen and Bintan, the waiting area provided bottled drinking water and plenty of them. Another thing, the EO didn’t allow us to swim after 6 am although race starts at 6.25 am. 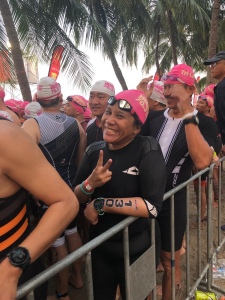 Regrouped with another Indonesian (Including the man behind me). An oriental looking guy came and asked

He is Jery (or Geri), an Indonesian living in Laos for several years. He has done that and this half Ironman across South East Asia and annually do Tri Race in Bang Saen. Actually, it was the first time for the 70.3 distance was held under Ironman organizer. Jery also told us a bit about the city, although it’s quite and small, it holds many sport events during a year and the pretty girl next to us is a Thai Model! @mymanow IG nya #penting

Biar wa ngga tegang, wa ngoceh aja terus! I took my gel and drink and another drink. Swimmers entered the water by 5 people, 5 seconds each .

Here’s my recap, it is going to be soooo long.

NOTE, that Briyani wasn’t for me!

So why it didn’t work.

My viem for this race

Yes, you read it! I surely wont pass this race! Race a Half marathon, on your neighborhood!

I’m still struggling how to bring back my old pace. yet, due to HM finisher T shirt with BTR Logo on the back, I was upgrading the distance. Yeah, I’m cheap sometimes 😀

since I’ll have BIG race early next year, I’ve to crush it anyway. 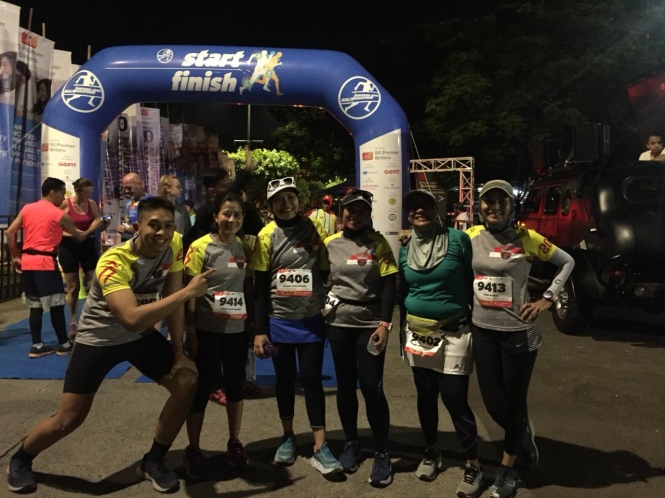 Have you see this pic already on my previous posts? 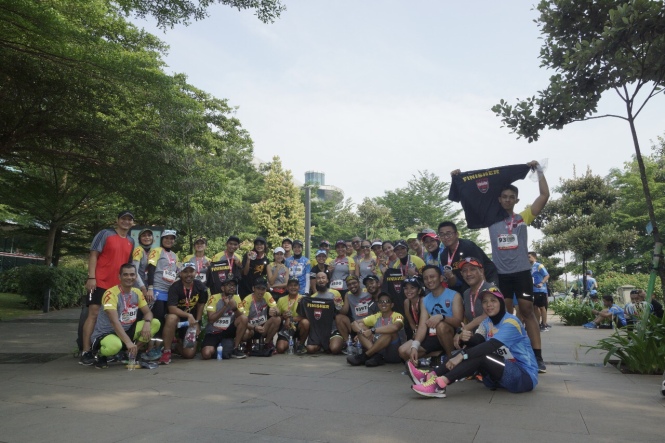 ‘Till my next recap!

What I did : Down load a 16-week-Full Marathon plan on which, time based. Not Distance Based.

What I didn’t do : exercise what training plan said. I didn’t religiously follow my TP, yet, this was the worst.  Only 40% of it…more or less.  My knee and heel were still hurt as I didn’t finish my therapy. Secondly, I forgot to cut my toe nails. More about this later.

What I did my best:  On longest run, I only clocked 18K for 3 hours run. I knew, I can’t finish tis race in the next 3 weeks. So, I planed to stop at Km 24. Why 24? keep reading! hahahaha.  However, H-7 from Sunday to Friday, I had beet juice everyday. I always consume Beet Juice before big race.

And owh, I was also interviewed by local TV. After introduction, like how many marathon I have done, when was the last time, he asked

A post shared by Bintaro Trojan Runners (@bintarotrojanrunners) on Apr 2, 2018 at 5:46am PDT 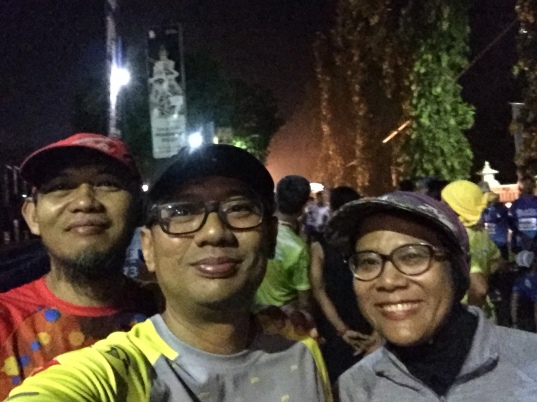 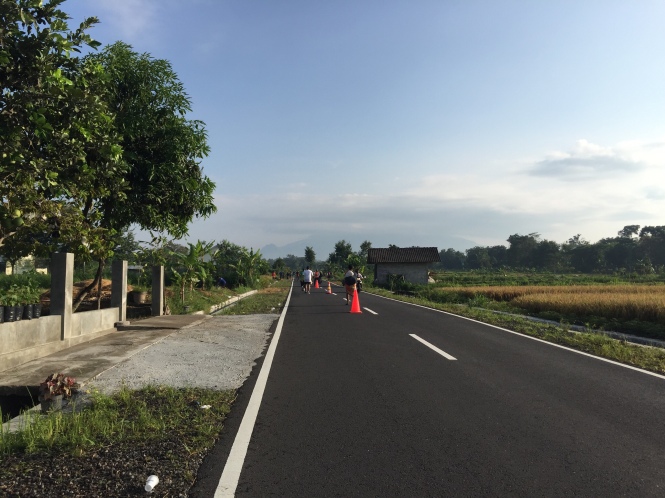 can you see the mountain? 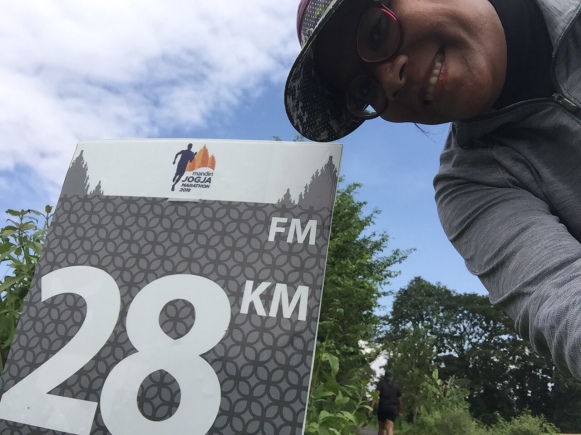 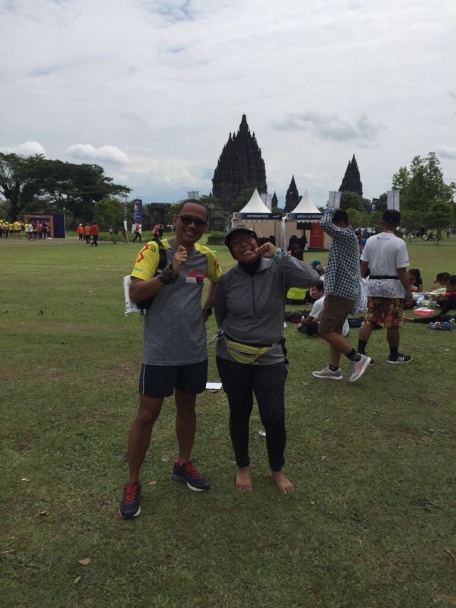 This is what the elevation for Full Marathon Jogja Marathon looks like. 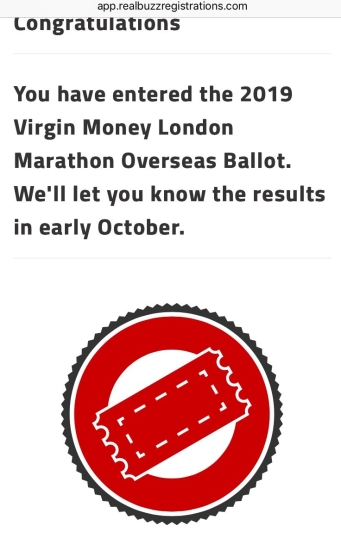 I try my luck for the third time!

there I was again, signed up Run For River UI 2017. My virgin half marathon was in this race as well. this time, I opted for 10K trail.

Yes, UI has its man-made forest and I’ve run there!

in short, I made Acha to sign up for this category. this anak mall garis keras agreed.

10K trail with brown bib, HM with red, 10K road with yellow. none of Trojan Runners participate in 5K. 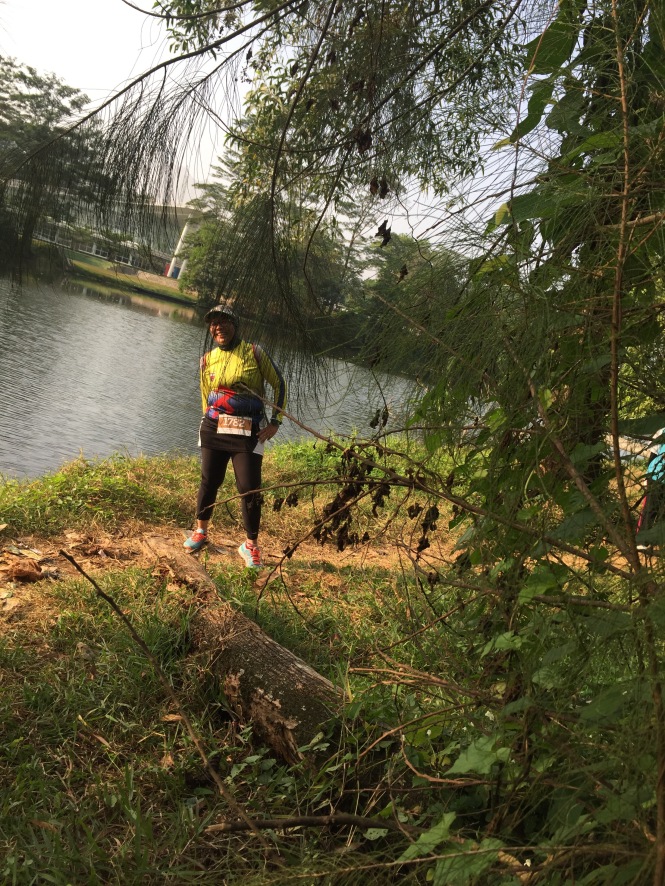 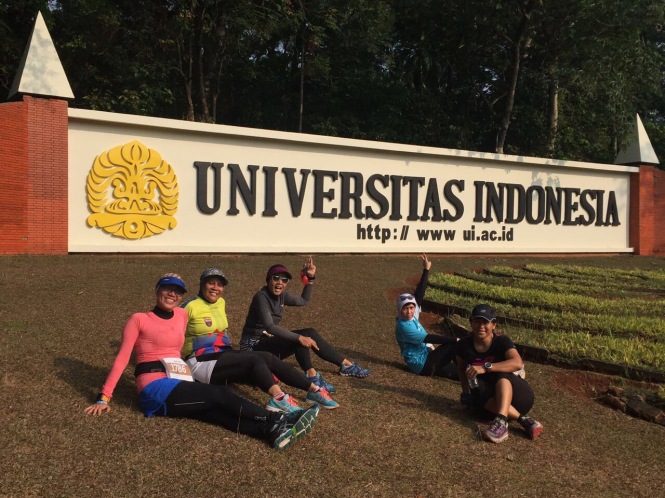 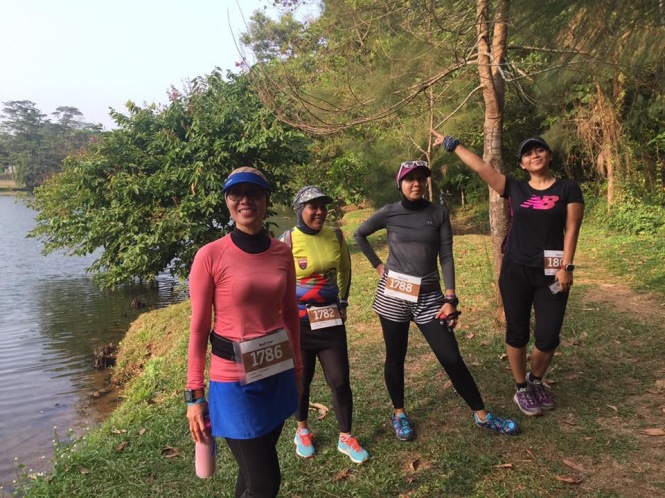 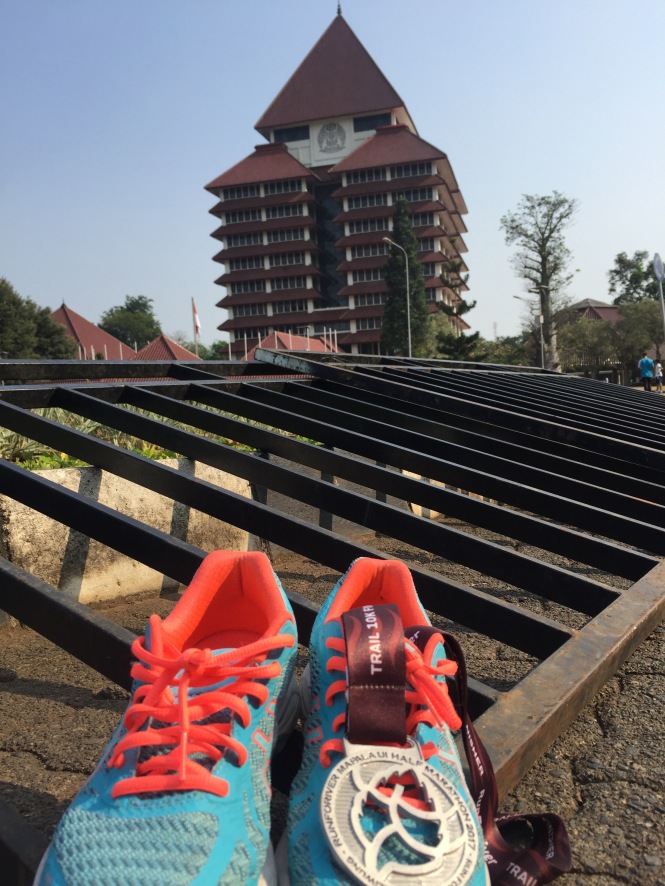 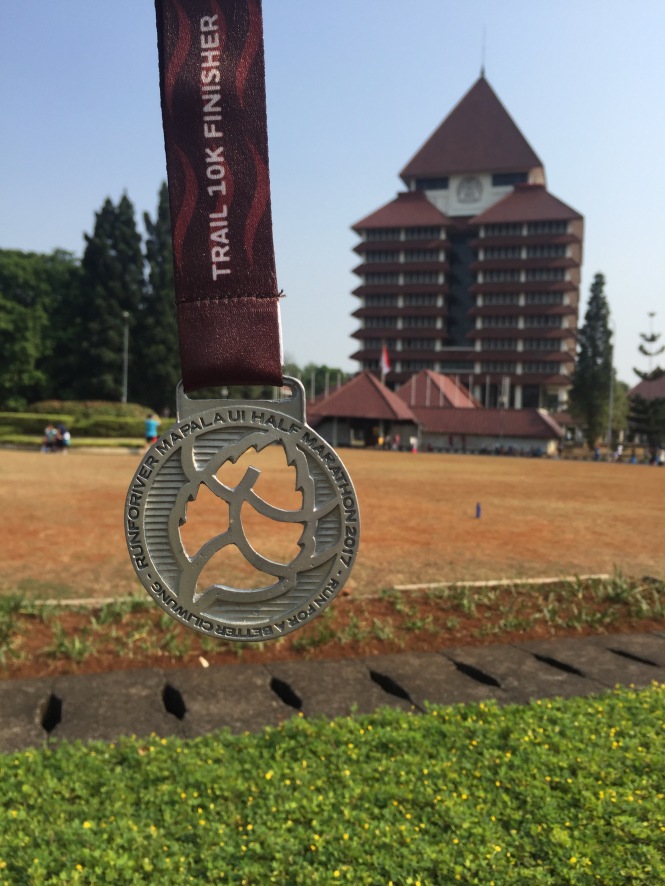 I haven’t check the result. it took almost 2 hours for me to complete the course. but I was very happy with this race! So much fun! Will be back again next year! 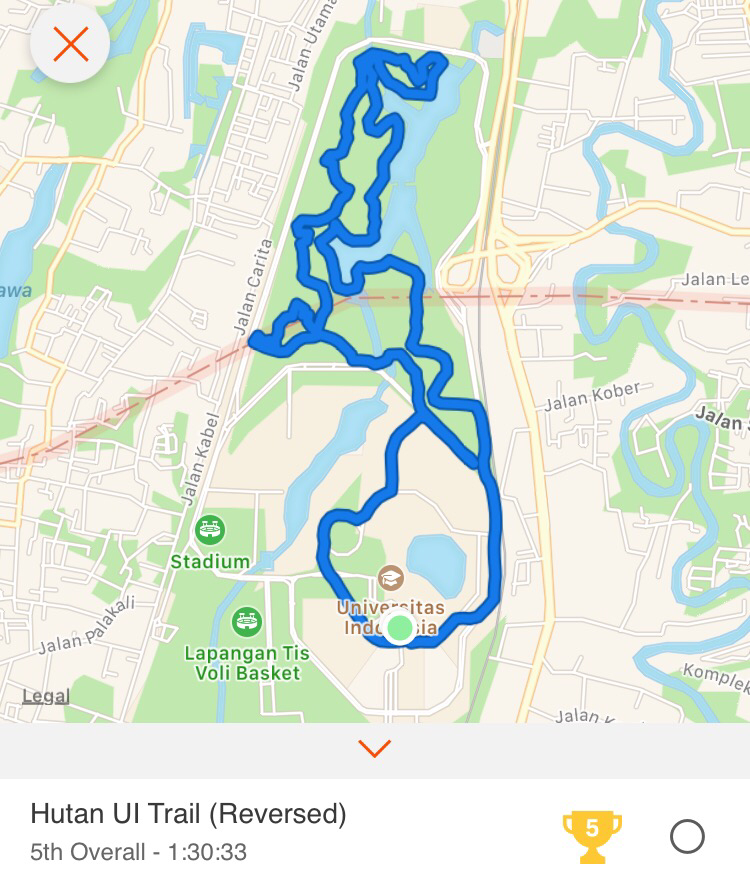