reminder : This is going to be a LOOOOONNNG POST!

The idea of taking this race came up when I decided to ditch my Bromo Marathon bib.Since I fell in love with Bromo since my first  visit , it feels like an urge to come back #aih
I asked Aniza, an experienced trail runner from KL whether she’d be back for BromoTenggerSemeru100ultra this year and she said yes….and Farah said yes. So this going to be our little reunion and our first race together.  Niza would took 70km tho. 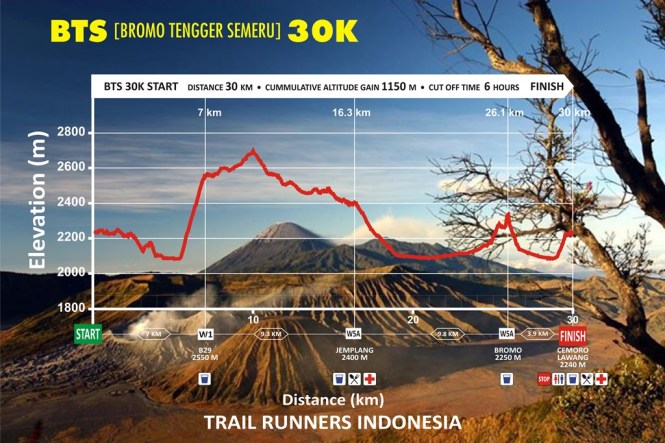 My long hilly trail practice was on August, nailed 20km in 5 hours with Jurian and Sinta. Thru slippery and steep hill somewhere between Gunung Pancar and Pondok Pemburu, I was in doubt whether I can conquer the course. Others, I combine hilly run and long run as I was about to have my first FM.

Week(s) before
Contacted everybody I knew who has done their trail race, reconnected with mas Dori, who participated in this event last year. reassured myself, no turning back.
My intake before the race is similar with the diet Rizkidd share before my Full Marathon.

D-1
Decided to ditch my hydrapack and borrowed Ira’s. So, before I left on Friday morning gw gedor rumah orang jam 5 pagi pinjem hydrapack-nya -__-
Arrived at Juanda Airport around 9, gathered with other participant. off we go to Cemoro Lawang.

What is race without drama :))

After I the hydropack drama, I forgot to bring power bank with me #meh
Then after berjam-jam pantat panas ngga sampe-sampe, our rented car had problem with its machine we have to stop just around 30 mins before Lava View, our hotel.
While Paul, decided to have a warm up lari-lari kecil di bukit keriing berpasir, gw duduk di warung aja makan mangga yang dikupasin,dipotongin, dibayarin Om Petrus =))
gw tinggal ngunyah aja.
These two gentlemen took 70K.

Ok, we arrived at the hotel. Thank you Jurian who arranged all of these.

Picked up the bib, went to our room which I shared with Penny, Chia and Mita from Surabaya. We prepared our things right away for tomorrow. Then I met Farah within next 30 mins. I bought another Raqtive hijbabs :p.

Farah shared me her tips for tomorrow race. She even wanted to have the map laminated but too bad we couldn’t get an iron.  I wrote down note of personal COT in each water station. I was busy muttering o’o…what was I thinking 5 months ago? After several serious discusion #halah I Decided not to wear the gaiter I bought before but made my own from socks. Niza showed me how to do it.
When we were waiting for 170Km flag off, surprise, I bumped into (literally) the boy next door when I was a kid, Andre, who took 70K. He lives in Singapore now. 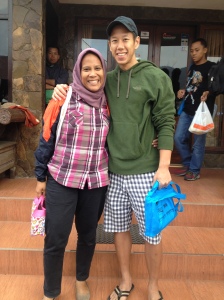 Last time I saw him was in JakMar last year when he nailed his 5th FM in 3 hours 45 mins. too bad, We didn’t talk much. it always nice to have short reunion with your childhood friend heh? Later I know, Andre lost for 20km (so he ran 90km in total) still with in 16 hours. wwwwwooooohoo.

170km category participant  start  at 5 pm. Only one female in this category

After we had dinner, I pushed my self to bed. Mita came to the room and we had small talk and she mentioned she had nailed RAR last August before COT. Kembali gw mikir, salah bener ini sih gw yang cuma hidup susah pas berjuang naik commuter line doank ikut-ikut ini. …. bahahhahahah
We woke up at 11.00pm to wish the 70K and 102K participants good luck. I didn’t see Andre and Niza hugged me and said “good luck for tomorrow” 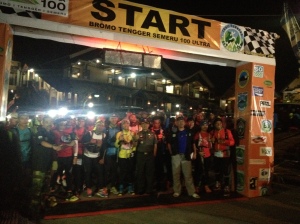 Woke up, decided to have a shower ^_^ had breakfast (Farah knew what I had for breakfast hahahahha) and went to start line . sibuk doa. 6 am sharp, the race started. Farah and Ejah run right away I couldn’t get their sight anymore.gee, these ladies sure practice well in Gunung Nuang.
Here’s the recap:

What come down of course, must come up. We have to conquer the famous B29, which look like this!!!!! From KM 5 to KM 7. yes, from the very bottom, until the very top of that. 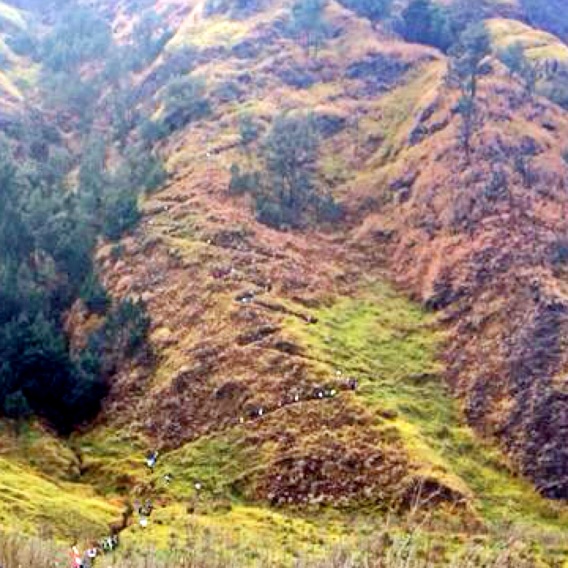 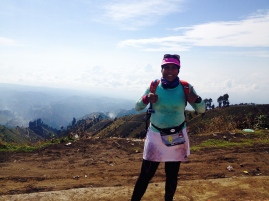 Based on Garmin, it took 1 hour 59 seconds for me from start line to the  first water station, and over 1 hour to conquer this steep —  2 km, zig zag hill!

This, when the nature answered the “WANNA BET” question.

THIS
WAS
THE
HARDEST
TRACK
EVER!

When you’re lost on the trail with the speed of a snail
And defeat looks you straight in the eye
And you’re needing to sit, your whole being says quit
You’re certain it’s your time to die.
But the code of the trail is “move forward don’t fail”
Though your knees and ego are scarred.
All the swelling and pain is just part of the game
In the long run it’s quitting that’s hard!

“I’m sick of the pain!” Well, now, that’s a shame
But you’re strong, you’re healthy, and bright.
So you’ve had a bad stretch and you’re ready to retch,
Shoulders back, move forward, and fight.
It’s the plugging away that will win you the day,
Now don’t be a loser my friend!
So the goal isn’t near, why advance to the rear.
All struggles eventually end.

It’s simple to cry that your finished; and die.
It’s easy to whimper and whine.
Move forward and fight, though there’s no help in sight
You’ll soon cross the lost finish line.

You’ll come out of the black, with the wind at your back.

As the clouds start to part; there’s the sun.

Then you’ll know in your heart, as you did at the start.
I,m not a quitter. I’ve Won!!

FIUHHHH!!!!
glad I crushed the whole track
glad I finished it in one piece
ALHAMDULILAH!!!

Anyway, Thank you all for the pray and support!

Yes, as stated on my running race page, I’m done my 10K race in Bromo! 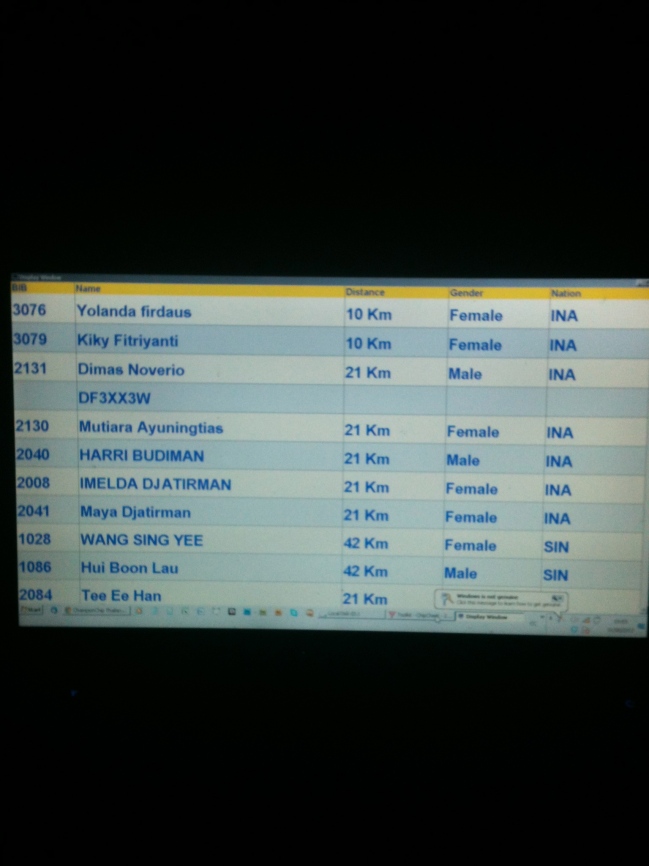 Anyway, I told my sister let’s run the first 5km and walk for the rest. Failed! Born and raised as city kid, the view was very breathtaking !!! For 10Km, run started at 8 am. The organizers had prepared a face mask for us. wow! 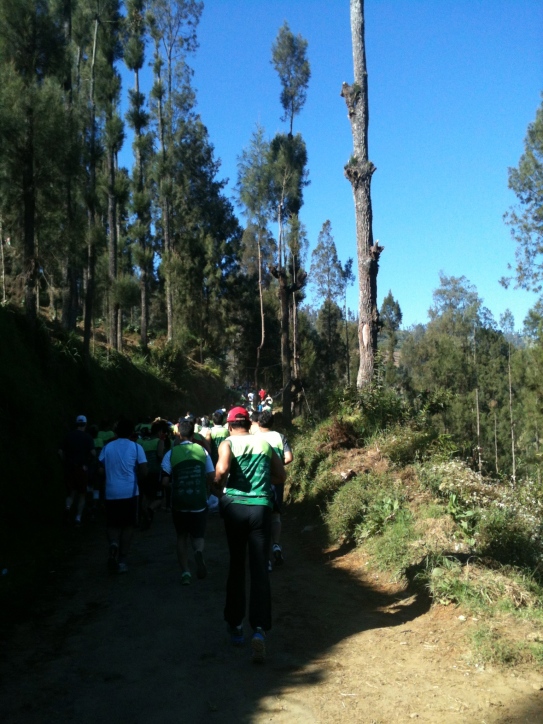 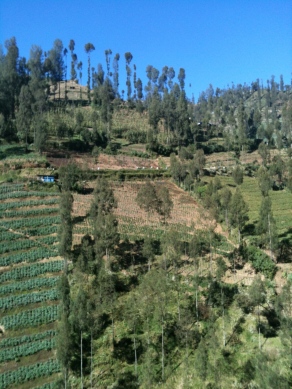 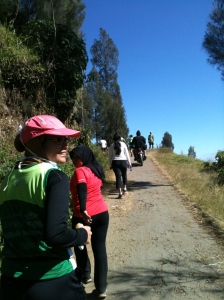 But, start at  this point, I love Trail Running !!!

Running downhill wasn’t easy either! The wind factor made me scare a bit, aslik takut jatuh ke dorong angin! Start from Km8 up until the finish line was another extreme uphill 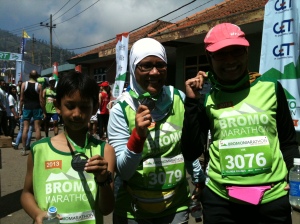 After taking pictures here and there, I heard no news from Imel, on which as plan we’re heading to Jakarta together . My sister and I had two return tickets actually =))

As overweight slow runner, I regretted that I only participated on 10K instead of 21KM. Half Marathon route offered more spectaculer view that you can really see Gunung Bromo

In short , my trip was very memorable.

Bandingkan dengan
“How to get to Tanjung aan from airport”