I never planned this race, Maya asked our swimming squad to sign up for this race one month before the D-Day as she’d be doing relay with Mas Emir ( her boss ) and Adhit (her spouse).

Some signed up as relay team (so there were 3 relay team among us) and some considered individual. i check my training plan, it suit me well. i had to do Tri Race simulation – Olympic Distance. But later I changed my mind. I refused the hustle bringing my own bike, I’d rent instead. They had 2 choices Road Bike and Mountain Bike, I opted the later. Simply, because it is 50 SGD cheaper! Ha ha! So I downgraded to Sprint Distance.

We woke up not so early. I learned that transition area would not be closed during the race. The regulation quite loose compare to other Multisports Events I’ve joined. We even put our bike on the D day.

So we arrived early to East Coast Park, I took my bike and proceeded to transition area, showing my wrist band.

Then Manda ( I often called her Sapi Bule) and were looking for toilet, do the “business” and lined up to get our body marked. And it was soooooo long. The committee seemed inefficient. And it wasn’t body marking with stamp, they used Black Marker (alias spidol). Meh!

Then we grouped with others, waiting for our wave. Female Sprint Category had the latest wave, at 9:05 Singapore Time.

The current was uneasy, I saw many longer distance participant carried away from the track then they were evacuated by boat. I thank God I didn’t sign up for OD!!!

Not until 9.15 am, that it was finally our turn, the last wave. Here’s the recap: 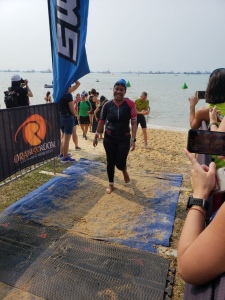 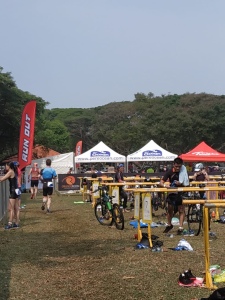 Adil, took my pic and gave my glasses. He was suppose to take pics of other participants, but he stuck with me hahahah! I asked him to get my glasses ready and when I’m done with my swim. I didnt use contact lens.

Later I found, Astrid got sea sick. So Thea haven’t do the bike when I saw her in transition area. Made it even worse, she got flat tyre twice! And only did 4 laps (instead of 6). But Ali ( the runner) allowed to Run. See? The event was loose. Hahahahah i also learned that the evacuated swimmers are still allowed to continue the race. Well ya whatever! I was there for fun!