Where was I? Ah, sister woke me up at 2 am, after dressing up I had (ngga lain dan ngga bukan) overnight oatmeal for light breakfast that I’d prepared night before.
2.45 sumthing, all trojans had gathered in lobby and off we go. Arrive at the venue almost an hour later, met Amel my colleague who took her virgin 10K and met some familiar faces.

Flag OFF for FM was at 5 am.
Some of us decided to take sholat shubuh at around 5 based on aplikasi jadwal sholat on their phone, but i decided to have mine in Km 5 where the committee provided temporary mushola.
Mas jaya, my former colleague who currently lives in DPS said shubuh time is 5.15. He wasn’t that sure though. Never mind, that the niat that counts 🙂

Oh ya, female trojans decided to dress up in Blue while I don’t have sumthing nice in blue gw beda sendiri kostumnya :p

My personal target is to finish this race before Cut Off Time, let it be 6:59:59 in one piece without dipapah or masuk ambulans.

There went of the flag off, greet by Torch along the way. Syahdu gitu deh.
Still dark at that time,
Ok, here is the recap

See those men infront of me? They were climbing and I was crawling

Thanks to that latihan di Sentul. i walked, but not running out of breath.

It would be a slap on the face since i told them not to easily give up. So, back to initial plan to finish this race in one piece before COT! 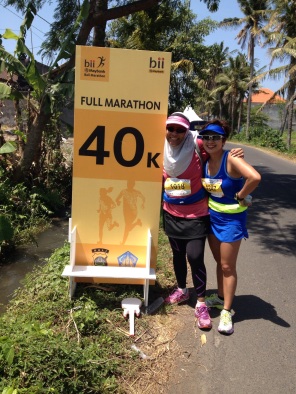 Diana still look stunning with her mega red waterproof lipstick!
She had her own hallmark moment at this point. Considering lack of practice, switch to FM at last mins, would shortly to nail her first FM in few minutes ! She just had half marathon a week before at Bromo Marathon. Jelmaan alien emang. What an endurance!
However, I screwed up her hallmark’s moment by asking her :
“Di, loe bawa lipstick merah lo ngga?
She couldn’t stop giggling and actually I forgot that I asked such a silly question.